“Like most rights, the right secured by the Second Amendment is not unlimited. From Blackstone through the 19th-century cases, commentators and courts routinely explained that the right was not a right to keep and carry any weapon whatsoever in any manner whatsoever and for whatever purpose. See, e.g., Sheldon, in 5 Blume 346; Rawle 123; Pomeroy 152–153; Abbott 333. For example, the majority of the 19th-century courts to consider the question held that prohibitions on carrying concealed weapons were lawful under the Second Amendment or state analogues. See, e.g., State v. Chandler, 5 La. Ann., at 489–490; Nunn v. State, 1 Ga., at 251; see generally 2 Kent *340, n. 2; The American Students’ Blackstone 84, n. 11 (G. Chase ed. 1884). Although we do not undertake an exhaustive historical analysis today of the full scope of the Second Amendment, nothing in our opinion should be taken to cast doubt on longstanding prohibitions on the possession of firearms by felons and the mentally ill, or laws forbidding the carrying of firearms in sensitive places such as schools and government buildings, or laws imposing conditions and qualifications on the commercial sale of arms.”  —  Justice Anthony Scalia, majority opinion in District of Columbia v. Heller.

“No freedman, Negro, or Mulatto shall carry or keep firearms or ammunition.”  —  Mississippi Black Code (1865)

“There’s no reason why on the street today a citizen should be carrying loaded weapons.”  —  Ronald Reagan, commenting on armed Black Panthers demonstrating in California 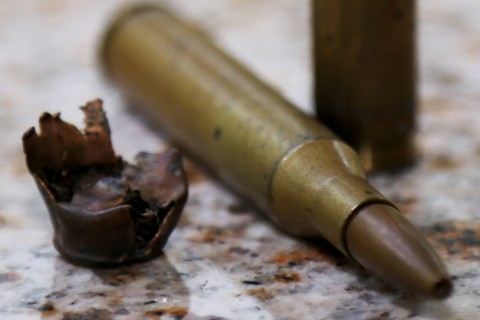