The photos show the National Historical Landmark site of the Choctaw gathering place where the infamous Treaty of Dancing Rabbit Creek was imposed on the Choctaw people in 1830. The site, in SW Noxubee County, is on the US National Register of Historic places, and has been designated a Mississippi landmark. It is now used primarily as a cemetery. The bottom photo should have been a clue, since it shows Choctaw stickball implements on the tombstone.

Under the treaty, the Choctaws agreed to give up their remaining fertile lands in Mississippi and Alabama in return for scrub lands in Oklahoma. Any Choctaws who chose to remain were granted citizenship, the first Native Americans granted that privilege.

This monument is at the site. 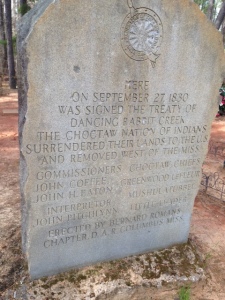 The site is not easy to find. You will need a good map or GPS. There’s no cell phone service, so the Google Maps app on your cell phone will not get you there. Also, after several miles of paved roads, you’ll find yourself on dirt roads, some of which pass through bottoms that look like they would wash out in a hard rain, so you might prefer to get there in a truck or SUV.

You are currently reading Chukfi Ahila Bok at The Better Chancery Practice Blog.