I ran across these two old post cards depicting the Clarke County Court House that preceded today’s building.  You can click on the pictures to see a larger version with more detail.  My guess is that the pictures were taken in the 1890’s to early 1900’s, judging from the buggies parked around the building.  The current court house does not have a cornerstone that I could find in a very brief saunter around the outside last week, but it does have the names of the Board of Supervisors 1912-1916, which would indicate to me that the building was built during their term.

I showed these to Gilford Dabbs, and he told me that he had heard that the old court house was located on what is now  a vacant lot next to First Baptist Church in Quitman.  By the way, Gilford is old, but he’s not old enough to remember this old building himself. 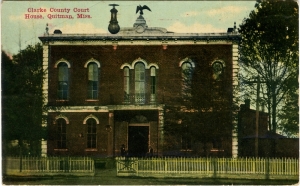 That object dangling in front of the building in the bottom picture is a street light suspended on wires.

These photos, along with around 4,600 others showing scenes from all around Mississippi during the period from 1892 to the 1940’s, are available at the Mississippi Department of Archives and History’s website here.