Before his epochal appearance on Ed Sullivan’s TV show in February, 1956, Elvis appeared in Meridian in 1955 with his first pink Caddy in a Fall Festival parade. Here’s the video.

Here’s a post I made previously on Elvis in Meridisn.

MORE ON ELVIS IN THE QUEEN CITY

I posted here, here and here about Elvis Presley’s appearance in Meridian in 1955. 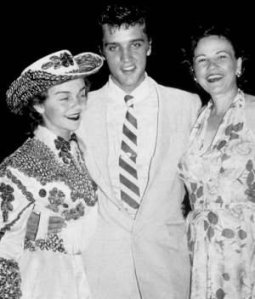 MYSTERY SOLVED: THE BUILDING WITH THE THREE ARCHES

In the post below about Elvis in Meridian I posed the question about the building with the three arches.  Turns out it was the YMCA located on the corner of 23rd Avenue and Ninth Street, which is now the location of WTOK-TV.  The television station renovated the building and removed the arches and porch roofs.  Tom Williams, the President of Meridian Regional Airport, sent me an aerial photo of the building in its pre-WTOK state.  Here is the pic that Tom sent … 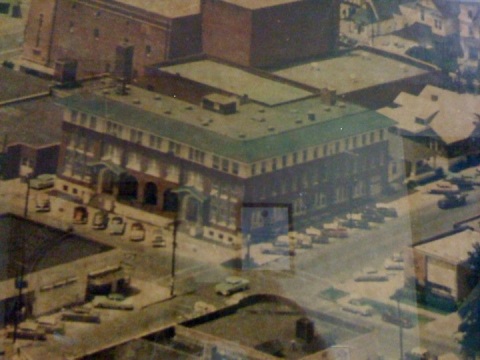 Recognize the three arches and the porch roof from the Elvis parade photo? That’s the Temple Theater directly behind the YMCA Building.

Thanks to Tom for unlocking this mystery for us. That building would most certainly have been on any downtown parade route.

I have to confess to my second tour this weekend of that mystical shrine of tackiness, Graceland in Memphis, home of Elvis Presley and spiritual Mecca for his adherents.  We took some Louisiana relatives who had never been there.

It got me thinking about what I had heard for years — that Elvis had performed in Meridian.

What I had been told was that the King had been in Meridian years ago to perform at the fair and calf scramble before he became famous.  I even heard that there were photos.  So I dug around on the internet, and actually found a couple of photos.  The photos are both dated May 26, 1955, which would predate Elvis’s 1956 appearances on the Milton Berle and Ed Sullivan shows, the gigs that propelled him into national attention.  The pictures show him in his more princely days, before he was anointed king.

The photo below shows Elvis and Jimmy Snow riding on a Cadillac in the parade for the 1955 Fair in Meridian.  Anybody recognize that building?  It’s interesting to me that the crowd appears more interested in whomever is coming up behind Presley and Snow; of course, Elvis back then was merely a musical act from Memphis who was mostly known for his performances on the Louisiana Hayride.  Those folks on the parade route had no clue then that they were seeing a future international superstar.  Jimmy Snow, incidentally, was the son of country music legend Hank Snow, and deveoped his own career eventually performing on the Grand Ole Opry before becoming a minister in Tennessee.

The other photo, below, shows Elvis with Bill Black and Jimmy Snow on the same Cadillac.

Nobody I know in Meridian has developed any oral history about this or any clearcut description of the event.

“The audience response at Presley’s live shows became increasingly fevered. Moore recalled, “He’d start out, ‘You ain’t nothin’ but a Hound Dog,’ and they’d just go to pieces. They’d always react the same way. There’d be a riot every time.”  At the two concerts he performed in September at the Mississippi-Alabama Fair and Dairy Show, 50 National Guardsmen were added to the police security to prevent crowd trouble.”

According to the article, this was in 1956, after Presley had appeared on both Milton Berle’s and Ed Sullivan’s tv shows and created a national sensation.  Of course, the reference to the Mississippi-Alabama State Fair and Dairy Show is Meridian’s own and was back then.  Not enough info for me to resolve the discrepancy in dates beyond doubt.  My best guess is that the source for the Wikipedia info, who was part of Elvis’s entourage back then, may be a little confused as to the timing. I would go with the dates of the photos for two reasons:  first, that the dates of the pictures are part of their provenance; and second, after the national tv appearances, the crowd in the parade picture would have been far more focused on Elvis.

Steve Labiche did a little more research and found that the Cadillac had been purchased by Presley in Florida, and he had the dealer paint “ELVIS” on the door.

NOTE: the mystery of the building above with the three arches is solved here.

You are currently browsing entries tagged with Elvis Presley at The Better Chancery Practice Blog.